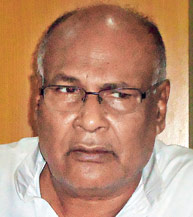 Odisha Channel Bureau Bhubaneswar, Sep 11: Even as his legislator son had surrendered two houses that were taken from different government agencies under discretionary quota and had also been questioned by the CBI for his alleged links with an accused chit fund company, Biju Janata Dal Rajya Sabha Member Kalpataru Das enacted a resignation drama saying that allegations were made against him to tarnish his image.In a letter to party president and Chief Minister Naveen Patnaik late on Thursday evening, Das tendered his resignation from the post of leader of Biju Janata Dal Parliamentary Party in the Rajya Sabha.In his attempt to overcome the embarrassment that he and his legislator son Pranab Balabantaray had cause to themselves and the ruling BJD, Das said he had been targetted by certain individuals for the last one and half month.False and fabricated allegations were being made one after other systematically to tarnish my image, the Rajya Sabha Member claimed in his letter.Not only Balabantaray had returned two government houses, the names of the father son duo had also figured prominently in the Ghangapatna land scam.“I have been loyal to my leader and the party and have worked sincerely.I do not want the image of my leader and the party to be tarnished,” Das said in an attempt to make people believe that he or his family members were not involved in the chit fund scam or land scam.The resignation of Das was accepted by the party president and Dilip Tirkey, another Rajya Sabha Member of the party was appointed as the new leader of the BJD Parliamentary Party in the Upper House.