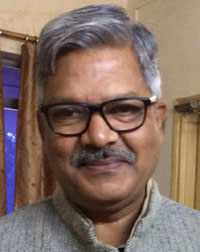 Odisha Channel Bureau Bhubaneswar, Oct 22: Finding itself in an embarrassing situation in the wake of his recent statements to the media and comments on social media, the Bharatiya Janata Party suspended senior leader Ashok Sahu on Thursday.State BJP spokesman Samir Mohanty told journalists that the party suspended Sahu for anti-party activities as he had made objectionable comments on social networking sites.Mohanty said Sahu had gone against the party rules by going to media and social media against the State leadership.Sahu has been asked to respond to a show cause notice within seven days explaining why he should not be expelled from the party.“Kandhamal Parliamentary Constituency by-poll result is lesson for BJP to introspect why Modi wave is diluted in Odisha unlike any other part in the country,” Sahu had twitted on October 21.Sahu, a former Indian Police Service officer who served in Assam and had joined the BJP after resigning from his job, had unsuccessfully fought the 2009 Lok Sabha polls as BJP nominee for Kandhamal Parliamentary constituency.He was denied a party ticket to contest from Kandhamal in the general elections held earlier this year as well as the by-election in the seat that was held on October 15.Sahu also worked as vice-president of the State BJP as well as party’s spokesman in the past.Reacting to the suspension order, Sahu has said that he was yet to receive the suspension order from the party and would respond only after he received it.Meanwhile, speculation is rife in the State political circles that Sahu may join the ruling Biju Janata Dal if he is expelled from the BJP in the days to come.