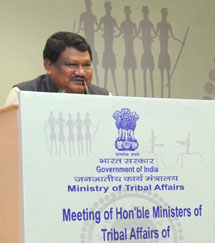 Odisha Channel Bureau Bhubaneswar, Oct 28: Centre has launched Vanbandhu Kalyan Yojana (VKY) for welfare of tribals.Launching the scheme on the occasion of the meeting of the Tribal Welfare Ministers of States/UTs in New Delhi on Tuesday, Union Tribal Affairs Minister Jual Oram said that the scheme has been launched on pilot basis in one block each of the States of Andhra Pradesh, Madhya Pradesg, Himachal Pradesh, Telangana, Odisha, Jharkhand, Chhattisgarh, Rajasthan, Maharashtra and Gujarat.According to a PIB release, the Centre will provide Rs.10 crore for each block for the development of various facilities for the tribals under the scheme.These blocks have been selected on the recommendations of the concerned States and have very low literacy rate.Speaking on the occasion, Oram said this scheme mainly focuses on bridging infrastructural gaps and gap in human development indices between Schedule tribes and other social groups.He said VKY also envisages focusing on convergence of different schemes of development of Central Ministries/Departments and State Governments with outcome oriented approach.Initially the blocks having at least 33% of tribal population in comparison to total population of the block will be targeted.Oram informed that his Ministry has taken up initiatives for strengthening of existing institutions meant for delivery of goods and services to tribal people i.e.Integrated Tribal Development Agencies/Integrated Development Project and creation of new ones wherever necessary.He said that specific funds allocated to the State Governments for this purpose should be utilized judiciously with a view to build the institutional mechanism more robust by way of strengthening these institutions. Referring to the situation where Minor Forest Produce (MFP) is more often than not determined by the traders instead of self sustained process of demand and supply.The Minister said his Ministry has taken note of the situation and has implemented a scheme to ensure that such forest dwellers are not deprived of their due.Under the scheme maximum selling price for MFP is being implemented in schedule V States initially.He said a web based portal has also been developed which indicate current price of MFPs on real time basis across different mandis of the States.12 MFP products have been included in the programme namely Tendu Leave, Bamboo, Mahuwa Seeds, Sal Leaf, Sal Seed, Lac, Chironjee, Wild Honey, Myrobalan, Tamarind, Gums (Gum Karaya), and Karanji.