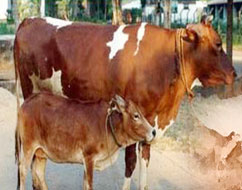 Odisha Channel Bureau Bhubaneswar, Nov 4: Odisha government has set a target to increase milk production to 130 lakh litres per annum by the year 2020.A decision was taken in this regard at a high-level meeting of the Fisheries & Animal Resources Development Department that was Chief Minister Naveen Patnaik presided at the Secretariat here on Monday.Milk production, which was 38 lakh litres in 2007, has increased to 46 lakh litres in 2014, the meeting was informed.The meeting also decided to increase egg production from 63 lakh to one crore by 2020, and fixed a target to increase meat production to 1.8 lakh tonne by 2020 from 1.53 lakh tonne now.The meeting also decided to set up a modern plant under the Odisha State Cooperative Milk Producers’ Federation (Omfed) at a cost Rs.100 crore in Cuttack district to increase milk production in the State.