The Leaning Temple of Huma

By Biranchi MishraAbout 30 km from Sambalpur in the western part of Odisha, there is a small village ‘Huma’ on the bank of the river Mahanadi .In the 17th century AD during the Chouhan rule in Sambalpur, a temple dedicated to Lord Siva was built here on the orders of King Baliar Singh.The hitherto obscure village became famous as a pilgrimage centre.It is one of the eight Saiva Shrines (Astasambhu) of the region the other seven being located at Gaisima, Sorna, Deogaon, Saranda, Ambabhona, Niljee and Maneswar. 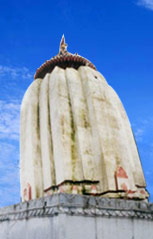 As the legends would have it, the appearance of Lord Siva at Huma was first felt by a cowherd boy when he found that one of his cows automatically poured milk from her udder on an outcrop of rock.According to another legend, a milkman daily offered his dole of milk on a rock surface with the belief that it was the abode of Lord Siva and to corroborate his belief, the milk at once vanished, as if the rock drank it.With such miraculous incidents, people believed that Lord Siva has appeared there and started worshipping the rock.When the news reached the years of the king, he ordered for construction of the Temple and donated seven villages in the worship of the Lord.Whatever be the truth of the legends, the fact remains that Huma is one of the most important Saiva centres of the Western Odisha.The congregation on the occasion of the Sivaratri is comparable to any popular Saiva Shrine of Odisha.Huma is as important a religious centre as it is unique in temple architecture.Built in order with a front apartment, the monument is a leaning temple like the leaning tower of Pisa .Not only the main temple with its door jamb but also two other shrines in the precincts are leaning southwards which can be distinctly noticed.There is no recorded evidence available to indicate the reasons for the leaning character of the shrine.Whether it was originally built leaning or it became like that later due to weak foundation or for some other reason is also not known.However, a close look at the site indicates that the foundation of the temple is not weak and hence the possibility of the temple leaning later due to weak foundation is remote.A legend records that the Lord himself desired to reside in a leaning temple and hence the temple was built leaning.Whatever be the reason, the temple is unique and only one of its kind and worth visiting, pending further research.Another attraction of Huma is the abundance of Mahasir fish, locally known as “Kudo Fish” found in the river Mahanadi .They are so tame that they take sweet meats from the hands of the visitors .To play with them like playing with Dolphins is a life time experience.A cruise by country boats is an additional pleasure.The scenic beauty of Huma, especially during sunrise and sunset around the river is fantastic.To watch the weavers at the handlooms in the village is a bonus at no extra cost.Huma is a must in the itinerary of the visitors to Sambalpur.Away from the din and bustle of city life, a visit to the calm and serene atmosphere of Huma is amply rewarding.It is convenient to hire a vehicle at Sambalpur to visit Huma.On the way to Huma from Sambalpur (10 km) comes Maneswar, an urbanised village on NH-6.The temple here is another shrine of the Astasambhu dedicated to Lord Siva.The additional attraction of this place is the congregation of hundreds of tortoise found in the pond close to the Temple.Visitors to Huma can stop here for some time.On the Kolkata-Chennai line of the South Eastern Railways and on the junction of NH-6 and 42, Sambalpur is connected by direct rail and road services with all major cities of the country.Nearest airports are at Raipur and Bhubaneswar (about 300 km).There are excellent hotels including the OTDC Panthanivas (Ph:0663-2411296/2411282) to provide comfortable accommodation.For further information and assistance, any of the Government of Odisha Tourist Offices or the Tourist Counters can be contacted.The Tourist Office at Sambalpur is located in the Panthanivas (Ph: 0663-2411118).The writer can be contacted at: bmishra49@gmail.com