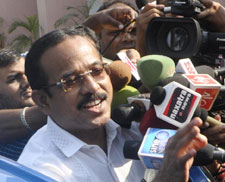 Odisha Channel Bureau Bhubaneswar, Nov 10: Biju Janata Dal Member of Parliament Ramachandra Hansdah, former BJD legislator Subarna Nayak and former BJP legislator Hitesh Bagarti were denied bail by a local court on Monday and remanded to judicial custody.The three politicians were produced before the court on the expiry of their CBI custody remand.The court remanded them to judicial custody for 13 days while rejecting their bail petitions.The bail petitions of the three accused leaders were opposed by the CBI.Hansdah, Nayak and Bagarti were arrested by the CBI here on November 4 for their alleged links with the Nabadiganta Capital Financial Services (NCFS), a chit fund firm that duped thousands of depositors in Odisha.The three were Directors of NCFS.Hansdah and Nayak were suspended from the BJD within hours of their arrest by the CBI on Tuesday.The three leaders were sent to be lodged in the Jharpada jail in the city where several other accused persons in the chit fund scam have been lodged.