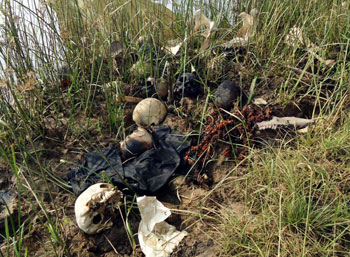 Odisha Channel Bureau Puri, Nov 24: The recovery of about 20 human skulls along with some animal skulls has created panic among people in this coastal Odisha district.The police have detained one person in connection with this rare recovery in the region.The police are questioning a local Tantric after the skulls were found under Liakhia bridge on Kushabhadra river along the Puri Konark marine drive on Sunday.Some skulls have been sent for forensic examination and further investigation is in progress, according to the police.