Classical arts are links with past: President 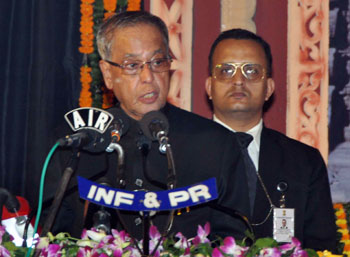 Odisha Channel Bureau Bhubaneswar, Nov 29: President Pranab Mukherjee has said that classical arts are not only our link with the past, but foundation for our current cultural thought and future artistic excellence.Performing arts like dance, drama, music, which have been an integral part of our Indian identity and culture, need to be patronised for achieving greater cultural synthesis, Mukherjee said while addressing the golden jubilee celebrations of the Utkal Sangeet Mahavidyalaya in Bhubaneswar this evening.The President said the classical music and dance in our country witnessed a host of changes and re-inventions.“The most important of these were that the masters of the performing art were now seeking to find patronage for them beyond the traditional historical domain.These new impulses resulted in India re-discovering its culture in a manner and scale not previously seen.”Mukherjee felt that setting up of higher institutions like Utkal Sangeet Mahavidyalaya, Bhatkhande Music Institute, Lucknow, is a continuation of this tradition wherein the state funds and promotes various forms and aspects of Indian art, music, drama, dance and culture.During his address, the President paid glowing tribute to Gurus like late Singhari Shyam Sundar Kar, late Pankaj Charan Das, late Sanjukta Panigrahi and host of others for their contribution to the field of dance, music and instrumental performance.Earlier, on his arrival at Bhubaneswar airport, the President was given a warm welcome by the Governor S.C.Jamir, Chief Minister Naveen Patnaik and senior government officials.President will stay tonight at Raj Bhawan, Bhubaneswar.On the second day of his visit to Odisha, he will inaugurate the Vivekananda Memorial building of Sri Ramakrishna Ashram at Madanpur-Rampur in Kalahandi district and later in Bhubaneswar will address the Golden Jubilee celebrations of Rama Devi Women’s College.