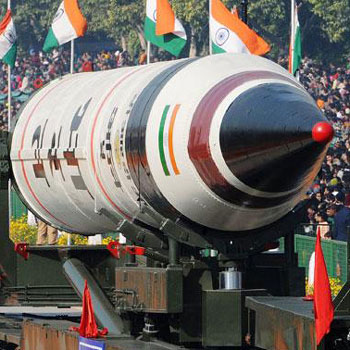 Odisha Channel Bureau New Delhi, Jan 31: President of India Pranab Mukherjee congratulated DRDO on the successful test-firing of the third developmental trial of Agni-V surface-to-surface missile.In his message to Avinash Chander, Scientific Advisor to Raksha Mantri and Director-General, DRDO, the President has said, “I extend hearty congratulations to all those associated with the successful test-firing of the third developmental trial of India’s indigenous Agni-V surface-to-surface missile.“I am happy to know that many new technologies relating to navigation and guidance, warhead as well as engine has been tried out in this version.“I understand today’s test is also the first time the missile has been tried out in a canisterised version.” Kindly convey my felicitations to the members of your team of scientists, engineers, and all others involved in this effort.Our nation is grateful for their hard work and proud of their accomplishment”, Mukherjee said.Meanwhile, Prime Minister Narendra Modi has saluted the scientists on the successful test-firing of Agni-V missile.”Successful test-firing of Agni V from a canister makes the missile a prized asset for our forces.I salute our scientists for their efforts”, the Prime Minister said.Agni-V was successfully test fired from a canister today at 08.09 hrs.It was a historic moment when for the first time in India, an ICBM about 17m long and weighing over 50 ton majestically rose from the confines of its canister.At the predetermined moment, having risen to about 20 meters height, it’s first stage motor ignited lifting Agni-V into the sky.The flight continued on its predetermined path during which the second, all composite light weight motor, followed by the third, innovatively designed conical all composite rocket motor propelled the missile into space taking it to a height of more than 600 km.The missile, after reaching peak of its trajectory turned towards earth to continue its journey towards the intended target with a speed now increasing due to the attraction of earth’s gravitational pull and its path precisely directed by the advanced on-board computer and inertial navigation system.As the missile entered earth’s atmosphere, the atmospheric air rubbing the skin of the missile during the re-entry phase raised the temperature to beyond 4000 degree Celsius.However, the indigenously designed and developed carbon-carbon composite heat shield continued to burn sacrificially protecting in the process the payload, maintaining the inside temperature below 50 degree Celsius.Finally, commanded by the on-board computer with a support of highly accurate ring laser gyro based inertial navigation system, the most modern micro inertial navigation system (MINS), fully digital control system and advanced compact avionics, the missile hit the designated target point accurately, meeting all mission objectives, according to an official release.