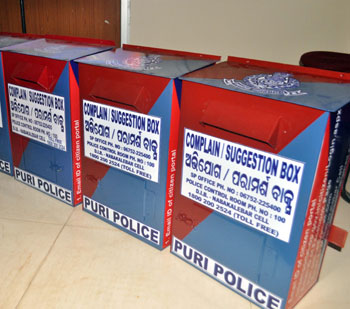 Odisha Channel Bureau Puri, Dec.9: In an attempt to become people-friendly ahead of the Nabakalebara festival of Lord Jagannath next year, the Puri police have started taking a series of measures to help the lakhs of pilgrims who come to the holy coastal Odisha town every day.Nabakalebara is a unique ritual associated with Lord Jagannath, Lord Balabhadra, and Devi Subhadra in which present idols are replaced by a new set of idols.The last Nabakalebara ceremony was held in 1996.The next ceremony will be held in July 2015 when more 30 lakh devotees are expected to visit Puri.In order to reach out to the people and handle their grievance, the Puri police have launched a Facebook page on Tuesday.Superintendent of Police of Puri Ashish Singh has said that the people can also send e-mails listing their grievance to puripolice@gmail.com and nabakalebar.policeportal@gmail.comA toll free number 1800 200 2524 has been announced for the people to seek police assistance.The toll free number will start functioning from December 15.Tourists from outside the state and country can use it to get police help he said.Five complaint–cum-suggestion boxes have also installed at Sri Jagannath temple main entrance gate Simhadwar, Railway station, Bus Stand, Digabarini and Gouranga Chhak of the town.The boxes would be opened at regular intervals and action would be initiated after evaluating the complaints and suggestions, according to Singh.To mitigate harassments by fake travel and tour operators, Singh has directed all the operators to get registered within a fortnight or else all the unregistered ones would be closed.A joint action team comprising government railway police (GRP), railway protection force (RPF) and the city police have been formed to weed out brokers from the railway station and hawkers from the bus stand.No auto-rickshaw and taxi driver would be allowed inside the railway station to get passengers, said Singh.