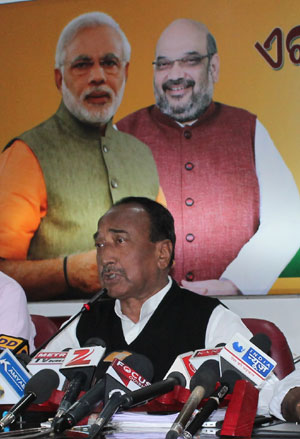 Odisha Channel Bureau Bhubaneswar, Dec 19: Senior Bharatiya Janata Party leader Bijoy Mohapatra today criticised the Naveen Patnaik Government over its decision to cancel allotment of plots, houses and flats made under discretionary quota.Stating that the decision was taken in haste to hoodwink the people ahead of the BJP president Amit Shah’s visit to the State, Mohapatra demanded that the irregularities committed in such allotments since January 1, 1995.The senior BJP leader said that the State government’s decision to cancel the allotments may not stand legal scrutiny.The Government had neither studied the Supreme Court decision in the Satish Sharma case or the decision of Orissa High Court in similar cases, Mohapatra said.He alleged that the Naveen Patnaik Government was adopting different yardsticks with regard to allotment of government land to different parties, particularly with regard to allotment of prime government land to big companies in Bhubaneswar.The State government had allotted prime land to many companies while not formulating a comprehensive land allotment policy despite the State High Court’s order way back in 2002, Mohapatra pointed out.