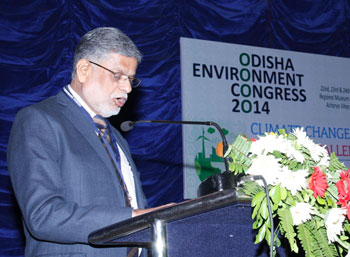 Odisha Channel Bureau Bhubaneswar, Dec 22: “Simply tolerate or prevent, these are two options left to face the negative effects of climate change,” observed Virendra Pal Singh, senior advisor of World Agroforestry Centre, South East Asia while presenting his keynote address on the inaugural session of the 5th Odisha Environment Congress here on Monday.Climate Change and Environment is one of the six programmes of the World Agroforestry, Singh informed, while adding that focus was on suffering of the society as almost all the systems had been affected and going to be effected in the future as well.He stressed on community-driven process focusing on agriculture to deal with the effects of climate change and environment keeping in view the vulnerabilities of drought, flood and cyclone.He also advocated in favour of climate-smart agriculture, cutting of green house gas emissions, livelihood improvement and environment sustainability.Singh, while speaking on climate change, informed that two noticeable features of effects of climate change on the environment in India are; rise in temperature and shift in snowfall and appealed for three types; mitigation, adaption and avoiding and minimizing the effects of climate change as solution.Odisha Industries Minister Debi Prasad Mishra inaugurated the three-day-long OEC-2014 and expressed his concerns about health hazards in various vulnerable pockets in the state as climate change and its impact is visible nowadays.Panchayati Raj Minister Arun Kumar Sahoo urged the scientists and experts to prepare action plan keeping in view the problems of laymen and stressed “maximum budgetary provision should be made for climate change and environment.”OEC Chairman D.K.Roy presided the inaugural session attended by former Member of Board of Revenue Aurobindo Behera, RMNH Director Indresh Kumar and OEC organising secretary Sudarsan Das in which proceedings of the Congress on the theme of `Climate Change & Environment – Issues and Challenges for Odisha’ was released. The theme of first technical session of OEC was ‘Climate Change and Odisha’ while ‘Climate Change, Mining and Energy Sector in Odisha’ and ‘Climate Change and Coastal Zone Management, Odisha’ were the themes of discussion in second and third technical session respectively.As many as 42 experts have contributed papers on climate change and environment out of which one of the papers would be rewarded with “Best Paper” in order to promote young researchers and scientists.The OEC, to spread climate change issues and solutions among the young, is organising a `Children Environment Congress’ on Tuesday in which young students will be given a chance to present their understanding, creativity and activities.The Children Congress is going to be inaugurated by Radha Mohan, noted environmentalist.A workshop on `Odisha Climate Change Action Plan is also scheduled to be held on Wednesday which will be inaugurated by the Chief Secretary of Odisha Gokul Pati.Odisha Environment Congress (OEC) is being organised as an annual event in collaboration with the Forest and Environment Department, Government of Odisha, since 2010.The Human Development Foundation (HDF), Bhubaneswar, Centre for Environment and Development (CED), Thiruvananthapuram and Regional Museum of Natural History (RMNH), Bhubaneswar organise the event which has been providing a unique opportunity for academicians, researchers, scientists, planners, policy makers, students and practitioners to discuss and deliberate the issues related to environment.OEC also provides scope for publication and presentation on Odisha specific research based articles.Climate Change has the potential to derail the current growth and deepen the poverty in Odisha.The state is more vulnerable due to various factors including its 480 km coastline that is prone to climate mediated cyclones and coastal erosion and water resources depending on monsoon.Keeping in view of this potential threat of climate change, the Forest and Environment Department, the State government has come up with ‘Odisha Climate Change Action Plan’ which is timely and shows the commitment to address the issues pertaining to adaptation and mitigation of climate change affects.