Goyal takes over as Home Secretary 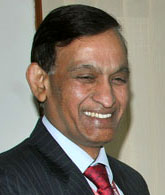 Odisha Channel Bureau New Delhi, Feb 5: L.C.Goyal, a 1979-batch IAS officer of Kerala cadre, has taken over as Union Home Secretary today, according to a PIB release.He replaces Anil Goswami.Goswami had resigned on Wednesday, hours after he admitted that he had called up CBI officers to dissuade them from summoning former Union Minister and Congress leader Matang Singh for questioning in Kolkata and then arresting him in the Saradha chit fund scam.“I feel humbled by this huge responsibility.I will fulfill this responsibility with utmost sincerity, commitment, diligence and with a profound sense of accountability.To be able to do so, I solicit active support and cooperation of all stake-holders,” Goyal said after assuming his new office.“The mandate of the Ministry of Home Affairs is essentially to ensure effective maintenance of internal security in the country.“To achieve this, necessary mechanisms, policies, and measures are in place.Wherever required and appropriate, improvements will be made within the given time-lines.“This will be so done in close association and coordination with the State Governments and Union Territories,” he said.Goyal served in the Union Home Ministry as Joint Secretary (Internal Security) a few years ago.Goswami resigned after the Narendra Modi Government asked him to put in his papers in the wake of controversy over his alleged attempt to stall the arrest of Matang Singh.Goyal will have a fixed tenure of two years, according to sources.