Naveen for Green Tax against mining 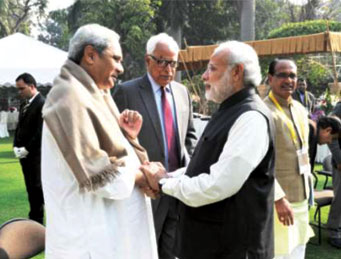 Odisha Channel Bureau New Delhi, Feb 8: Finally admitting that mining was causing pollution in the State, Chief Minister Naveen Patnaik today urged the Narendra Modi Government to adequately compensate Odisha way of a Green Tax against pollution caused by mining.“Our State is paying a heavy price in terms of pollution caused by the coal mines and extraction of other minerals.Odisha should be adequately compensated by way of a Green Tax against pollution caused by mining,” Patnaik said at the first meeting of the Governing Council of NITI Aayog here.The Chief Minister also said that Odisha being rich in mineral resources is not getting its due benefits from this mineral wealth.Patnaik further said that his Government is “ deeply disappointed with some provisions in the recent Ordinance on the MMDR Act such as the provision of deemed extension under Section 8A which severely restricts the number of leases that can come up for auction during the next five years.Among other things, Patnaik also sought Central assistance to implement the Biju Pucca Ghar Yojana, which he claims to be a scheme of his own Government.“Odisha accords top priority to provide pucca housing to all those with kucha houses in the rural areas.This would entail a huge cost of Rs.30,000 crore over the next 5 years.We request the Central Government to meet at least 75% of the cost,” Patnaik said.The meeting was attended by Prime Minister Narendra Modi, Finance Minister Arun Jaitley and Chief Ministers of other States along with NITI Aayog officials.