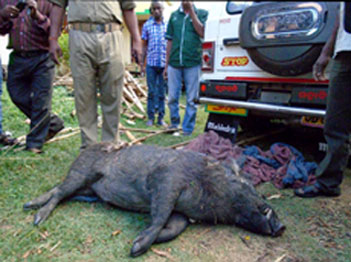 Odisha Channel Bureau Kendrapara, Feb 19: A rogue wild boar was allegedly hacked to death by angry people today in Chakroda village on the suburbs of the township, a week after the animal had triggered panic in thickly populated villages near the township by killing a man and injuring seven other local residents.The motionless body of the male wild boar was spotted at a cluster of bushes near the local gram panchayat office.Authorities had earlier had promulgated prohibitory order under Section 144 Cr PC within 500 metre radius of the gram panchayat office where the boar was sighted early morning today.The area had been cordoned off by forest personnel and policemen. The animal’s body bore multiple injury marks.In all probability, the animal was killed by local people.The animal had strayed into the villages from the forest areas close to Lalitgiri Buddhist monastery, Forest Range Officer of Cuttack Territorial Forest Division, Ashok Jena said.The body of the slain boar is being sent for post mortem to ascertain the exact cause of the animal’s death, the official added.Local forest officials had also made an official request with the higher ups to proclaim it as a rogue animal so that it could be shot dead for people’s safety, said officials. The rogue animal had killed a man and had injured at least seven persons after it had strayed into Hatabanpur, Chakroda and adjoining villages since February 13.Local residents were panicked a lot as the animal had been sighted at various spots.It may be recalled here that four forest personnel were injured yesterday as an angry mob on rampage and had attacked the officials at Chakroda village to protest against wild boar menace in nearby villages.Police have registered cases against nearly 30 local people on charge of assaulting the forest officials.However no arrest has been made in this connection.