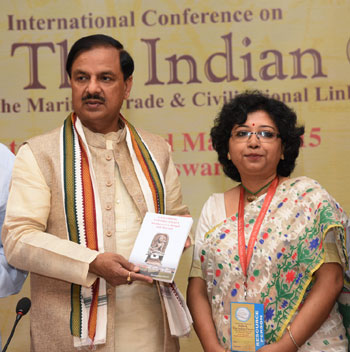 Odisha Channel Bureau Bhubaneswar, Mar 21: In the first of its kind confluence of Indian Ocean Rim countries in India, Union Minister for Tourism and Culture Mahesh Sharma today said that the Indian Ocean Region (IOR) is the prime focus of India as Prime Minister Narendra Modi aims to strengthen relationship within IOR region.India’s new initiative to deepen ties with IOR nations would definitely help to promote intra-regional trade and tourism among countries of Indian Ocean Rim, Sharma said.Chairing a plenary session in the ongoing conference on `India and The Indian Ocean: Renewing the Maritime Trade & Civilisational Linkages’ here, Sharma highlighted the need to build infrastructure to promote tourism in the country.Stating that the country has 7500 km coastline and out of that around 485 km comes in Odisha, which has a huge potential to attract tourists from across the globe, the Union Minister said that the Central Government is promoting tourism by initiating various programs.In the recent union budget, the Centre has rolled out many prominent schemes for promoting cruise and spiritual tourism, which had not been explored in the past, Sharma said.These initiatives will go long way in promoting tourism around costal belt of India, he added.The second day of the conference also witnessed many dignitaries from across the globe sharing their views and expectations from the conference.“A famous historian of France has said that history is the answer to questions that the present brings’.When you want to answer the present, you have to go back to history and I strongly believe that relationships can be revived as it has happened in the past,” said Jean Francois Salles, an archeologist from France.“This conference has turned out as a great learning since it has given us a unique opportunity to meet many people from the Indian Ocean countries.Hoping that this conference will expedite the process and facilitate dialogues in the future,” he added.Hoping from the conference to build cooperation among RIM nations, Dennis Rumley, Professor of Indian Ocean Studies & Distinguished Research Fellow, Curtin University, Western Australia, said, “We need to look at security from the broader prospect of environmental, human, economic and energy etc.Need of the hour is to build greater awareness and interest to cooperate in sustainably harnessing the benefits for inclusive growth.”Looking to explore India’s maritime culture and history, Elizabeth Sidiropoulos, Chief Executive, South African Institute of Institute of International Affairs, said “It becomes imperative to know and learn from experiences and look forward to continuously improvise on the positive and negative aspects of connectivity among various regions.”