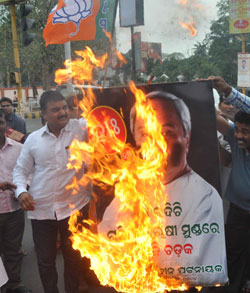 Odisha Channel Bureau Bhubaneswar, Mar 26: Odisha Bidyut Upabhokta Mahasangh today called a hartal across Odisha on March 31 in protest against the power tariff hike order passed by the Odisha Electricity Regulatory Commission.The Mahasangh has called for a statewide dawn-to-dusk hartal to highlight its demand that “this illegal, illogical tariff hike be withdrawn forthwith”.All consumers of electricity in the State including farmers, small and medium industries will be affected by the recent electricity tariff hike imposed by OERC, the Mahasangh said.The Mahasangh, which had been demanding that an audit of the power companies must be done by CAG before any hike of tariff, said that such an audit should be conducted before any orders of the OREC comes into effect.All types of franchise harassing and exploiting poor consumers must be withdrawn from the field, the Mahasangh demanded.The minimum fixed electric charges should not be collected when the consumer is paying for the electricity consumed by him, the Mahasangh said.While urging electricity consumers to join the protest on March 31, the Mahasangh appealed to the lawyers, doctors, teachers, peasants, workers, student and youth of State to record their protest against the “illegal, unlawful, illogical electricity price hike”.The Mahasangh, which is spearheading an agitation against power tariff hike since long, has sought the support of the opposition political parties, farmers’ organisations and trade unions to make the hartal a success.The decision to observe the hartal in protest against the power tariff hike, which is scheduled to come into effect on April 1 in the State, was taken a meeting that Mahasangh held on Wednesday evening.Apart from the office-bearers of the Mahasangh, many activists and leaders of different political parties including Congress, CPI, CPI(M), Samajwadi Party, Rashtriya Janata Dal, and Trinamool Congress attended the meeting.Both the major opposition Congress and BJP have also been opposing the power tariff hike inside the State Assembly as well as outside.Both parties had organised demonstrations in Bhubaneswar on Wednesday.