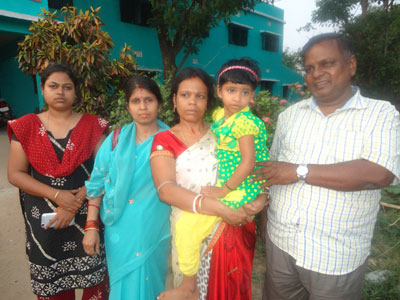 Odisha Channel Bureau Kendrapara, Mar 30: A four-year-old baby girl after languishing in jail for nearly two years was relocated to a childcare centre following intervention by a local court.Facing trial in a case of murder, parents of tiny-tot are lodged in local jail since past two years.The baby had been staying with her prisoner-mother in the women ward of Kendrapara jail.Distressed over the confinement of their child in four walls of the jail, parents had sought the prison authorities to intervene for her shifting to better surroundings of childcare centre.Abiding by legal provisions and jail manuals, the prison authorities had forwarded the under-trial duo’s prayer to Additional District and Sessions Judge Court.After court ordered the release of the child to a government-recognised and well-equipped childcare home, the child was relocated to Pallishree Kanyashram childcare centre at Korua under Patkura police station jurisdiction, Jail Superintendent Biren Sahu said.“Uncongenial environs of jail had taken a toll on the child.The baby knew nothing of the world around her because of her confinement.The girl is having a nice time here.She is enjoying the natural environment and company of playful mates of her age-group”, said Srikant Nayak, chief of the childcare unit.