Affordable power for all by 2019: Piyush Goyal 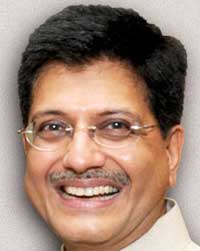 Odisha Channel Bureau New Delhi, April 9: The Government is committed to provide affordable, 24×7 power to all households by 2019, Union Minister of State for Power Piyush Goyal has said.Inaugurating a two-day conference of Power, Renewable Energy and Mines Ministers of States and UTs at Guwahati today, Goyal said that an efficient, resilient and financially healthy power sector is essential for growth and poverty reduction.Stating that the availability of quality, reliable and affordable power helps in the rapid socio-economic growth of the country especially the backward regions, Goyal said that the Government has launched Deen Dayal Upadhyaya Gram Jyoti Yojana (DDUGJY) with the objective of separating agriculture and non agriculture feeders to facilitate Discoms in the judicious rostering of supply to agricultural and non-agricultural consumers, strengthening and augmentation of sub-transmission and distribution infrastructure including metering in rural areas and rural electrification including micro grid and off grid distribution network.The scheme is an improvement over the previous programmes as it provides cafeteria approach to the States in prioritizing their needs rather than a straight jacketed approach of ‘One Size Fits All’, he added. “All states should sort out the procurement to generate more power.It will give all the States employment opportunities as well as power.We have specially taken a big CSR initiative as we are going to establish 5 cancer hospitals in coal mining areas in the country.” The Minister expressed satisfaction that during 2014-15 against the target of 20882 ckm of transmission lines and 47871MVA of transmission capacity have been 22100ckm & 65554 MVA respectively, which is the highest achievement ever in a year.Emphasizing on the efficient use of energy, Goyal said that domestic lighting and street lighting system is already progressing towards efficiency through utmost use of LED lights.Goyal said that his Ministry has recently concluded e-auction of 29 coal mines in 2 phases.The total proceeds from the coal mines auction cave crossed Rs.1.93 lac crore surpassing CAG estimate of Rs.1.86 lac crore losses on account of allocation of 206 captive coal blocks without auction since 1993.On major initiatives and achievements, the Minister said there is huge increase in thermal based electricity, doubling the coal production to 100 crore tons by 2020, more than 1,25,000 toilets for schools will be constructed as part of Swachh Bharat Abhiyan, he said.Goyal said that the Government has embarked on Rs.10,000 crore project to serve all North Eastern Region.On Subansiri Project, he hoped that a consensus would emerge among stakeholders for speedy implementation as this would expand opportunities to all especially irrigation, job creation, and affordable power to all.Accept it as a shared responsibility.