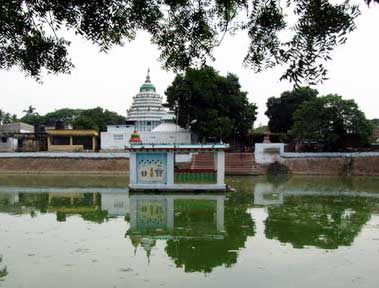 Odisha Channel Bureau Jagatsinghpur, April 17: The Neem tree (Daru) to be used for carving out the idol for Nabakalebara of Lord Balabhadra has been identified near Goddess Sarala shrine in this coastal Odisha district.The information about the selection of the holy near the Sarala temple at Kanak Pur in Tirtol Block of Jagatsinghpur was given to the media by Chief Administrator of Shri Jagannath Temple Administration Suresh Mohapatra early today.The district administration has started barricading the Daru and adequate security arrangement has been put in place to safeguard the tree.A similar Yagna will be performed on the lines of the Yagna that was being performed near the Daru of Sudarshan at Gadakantunia village on the outskirts of Bhubaneswar.The Balabhadra Daru will be cut and taken to Puri after a Yagna is performed by the Banajag team conducted near the tree.The Darus for the idols of Goddess Sabhadra and Lord Jagannath will be identified subsequently, according to Mohapatra.Meanwhile, the Sudarshan Daru was to be cut today afternoon after the end of the Yagna at Gadakantunia.The Banajag team will reach at the Sarala shrine after they make the Sudarshan Daru reach Puri within two days.