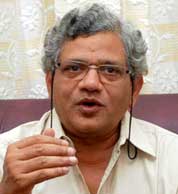 Odisha Channel Bureau New Delhi, April 19: Senior Communist Party of India (Marxist) leader Sitaram Yechury was today unanimously elected as the next general secretary of the party at the party.Yechury, a Member of the Rajya Sabha, was elected as the new chief of the party at the end of the six-day-long 21st CPI(M) Congress at Visakhapatnam.Sixty-two-year-old Yechury succeeds the party’s outgoing general secretary Prakash Karat as the fifth general secretary of the 50-year-old party.Yechury’s name was proposed for the post by Karat and veteran S.Ramachandran Pillai, who was initially in the race for the post.A new Central Committee, the party’s highest executive body, of 91 members, was also announced at the Congress, besides naming five special invitees and five permanent invitees, which then elected Yechury as the new leader.The new general secretary then introduced a 16-member Politburo of the party with four new entrants – Mohammed Saleem, Subhasini Ali, Hannan Mollah and G.Ramakrishnan.