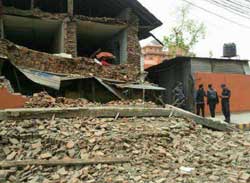 Odisha Channel Bureau Bhubaneswar, April 25: Tremors were felt at many places across Odisha as a massive earthquake hit north-eastern parts of India at around 11.50 a.m.today.People ran out of their houses and offices as soon as they felt the tremor in Bhubaneswar, Cuttack, Balasore and other others.The tremors lasted for about a minute, witnesses in Cuttack said.People ran out their homes in Bhubaneswar too.No loss of life, however, was reported from any part of Odisha.The impact of the earthquake was also felt in Kolkata, Uttar Pradesh, Bihar, Jharkhand, Delhi, Haryana, Punjab and other places in the northern region.According to the India Meteorological Department, the earthquake of 7.5 magnitude with depth of 10 km hit Nepal region at 11:41:25 HRS (IST).”We are in the process of finding more information and are working to reach out to those affected, both at home & in Nepal,” Prime Minister Modi said in Twitter after the earthquake.The Prime Minister is trying to reach Nepal Prime Minister Sushil Koirala, who is abroad.He has spoken to President of Nepal Ram Baran Yadav.Modi has convened a high level meeting with Ministers and top officials at 3 p.m.in the wake of the situation arising due to the earthquake.