Odisha Channel Bureau New Delhi, April 26: Rains have been predicted over Nepal and eastern parts of India even as another earthquake of 6.8 magnitude occurred today with its epicentre 65 km east of Kathmandu, according to Union Ministry of Earth Science.Another earthquake occurred today of 6.8 magnitude around 12.39 pm IST (Indian Standard Time) at a depth of 10 km with its epicentral region located in Nepal about 65 km east of Kathmandu.Its latitude and longitude are 27.71 N and 85.91 E respectively. Effects of this earthquake were also severely felt in all northern and central parts of India including in the capital city of New Delhi.Within ten minutes of occurrence of the quake the Indian Tsunami Early Warning Center (ITEWC) of INCOIS – Indian National Center for Ocean Information Services gave details of the epicentre and the magnitude of the quake.Meanwhile, the Weather Forecasting Center of the Indian Meteorological Department has predicted fairly widespread rain/ thundershower activity over Nepal during next 24 hours. 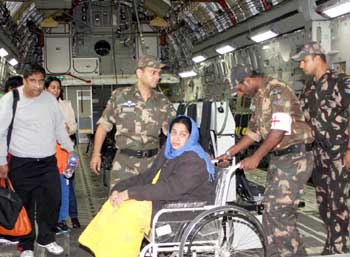 The activity is most likely to become widespread on April 27 and 28 with possibility of isolated heavy thunderstorm activity, particularly over eastern part of Nepal.Similar weather is also predicted for Kathmandu.It has been suggested that precaution be taken against the above weather and also due to possibility of landslides at vulnerable sites.Sub-Himalayan West Bengal and Sikkim would also experience fairly widespread to widespread rain/thundershower activity during next three days with possibility of isolated heavy thunderstorm.Scattered thunderstorm activity over Bihar and isolated over East Uttar Pradesh would also occur during next 2-3 days, according to a press release issued by the Union Ministry.CompensationThe next of kin of those who lost their lives in various parts of the country due to the earthquake yesterday shall receive an enhanced compensation of Rs.4 lakh from the National Disaster Relief Fund.This follows the Union Government’s decision to revise the guidelines for the National Disaster Relief Fund, and raise this compensation amount from Rs.1.5 lakh to Rs.4 lakh, in the event of death due to natural calamity.The above amount is in addition to the compensation of Rs.2 lakh from the Prime Minister’s National Relief Fund for the next of kin of those killed.A compensation of Rs.50,000 has also been announced for the seriously injured.