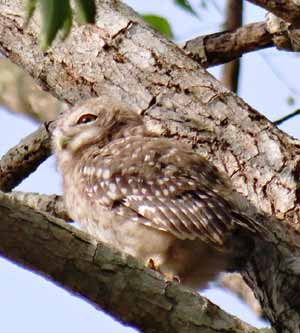 Odisha Channel Bureau Jagatsinghpur, May 6: The exercise to rescue owlets from the holy Neem tree identified as sacred logs for the carving out of Lord Jagannath’s idol has suffered a setback in Jagatsinghpur district’s Kharipadia village the religious tradition put brakes on the rescue act.The servitors doing rituals and Yagna near the sacred tree opposed the drive leaving the forest personnel red-faced on Tuesday.The forest department personnel were reduced to mere spectators as they were disallowed to climb the tree to locate the owlets and their chicks. The officials of Cuttack territorial forest division swung into action to rescue the avian species as departmental higher-ups taking note of a petition by wildlife activist Biswajit Mohanty had initiated steps to ensure the safety of owlets perched on the holy tree.“We paid respect to religious tradition and refrained from climbing up the tree.Two owlets that come under endangered species category under Wildlife Protection Act provisions were spotted while the chicks could not be sighted.Owlets’ nest also could not be located,” said Sudarshan Behera, Divisional Forest Officer of Cuttack Territorial Forest Division.The officials are stationed at the Daru site and are maintaining watch on the movement owlets.Strategy to rescue the owlets is being worked out.It would take at least three more days for conclusion of Daru rituals and the felling down of the tree.Step to catch the birds is being contemplated so that they could be safely relocated to Nandankanan Zoological Park in Bhubaneswar, the official added.