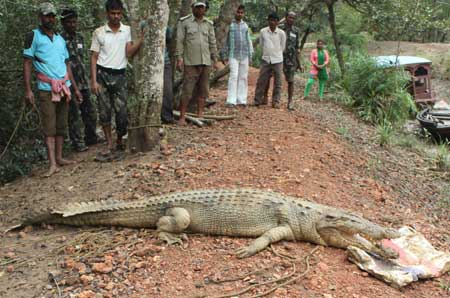 It was a large size adult crocodile and measured above 15 foot.The reptile’s body was spotted near Hansina river bridge.The body has been handed over to veterinary surgeons who would later conduct post mortem to ascertain the exact cause of animal’s death.Official sources, however, informed that there was external injury marks on crocodile’s body.So it might have been killed either by fishermen or the local people. As nesting season of salt-water crocodiles is now at its peak, there has been marked rise in crocs launching lethal assault on humans.At least two human casualties have been registered since past fortnight following crocodile attack.That’s why, residents living along the river-side villages have been instructed not to venture into croc-infested water bodies.For bathing purpose, the forest department has erected bamboo barricades at over 50 river ghats to ensure the safety of bathers, said forest officials. A total of 1649 estuarine crocodiles were enumerated living along the Bhitarkanika’s water bodies this year.