Controversy over Nabakalebara thickens in Odisha

Rajkumar MohantyPuri, June 19: The Daitapatis and the Shree Jagannath Temple Administration are in trouble as new facts coming out to public by servitors connected with the conduct of the Brahma Parivartan and questioning the entire Banajag process. 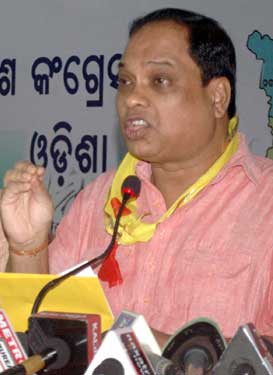 Krushna Chandra Maharana, a senior Biswakarma who earlier had participated in a number of Nabakalebara work of carving the images of deities on Darus (Neem tree trunks) told media persons today that Neem trees chosen as Darus for the deities were not suitable.It was difficult to carve out images of deities on those Darus, he told media persons today.This apart, frequent interference by a number Daitapatis while carving of Darus put Biswakarmas in a tight situation and work was stalled for hours together.The matter was intimated to the Temple Administration, but nothing happened.Meanwhile, the Chhatisha Nijog (confederation of all servitor bodies except Daitas) president Janardan Pattajoshi Mahapatra, the topmost Sri Jagannath temple servitor second after the Gajapati, said at a press conference today that the grave mishap in the Brahma Parivartan ritual of the deities has shocked every sevayat.“This unpardonable act of a section of Daitas should be dealt with a heavy hand,” said Pattajoshi Mahapatra.The scheduled observation of Trayodashi by the Daitas who planned to organise a free Mahaprasad distribution for lakhs of devotees is not prescribed in any of the texts in this regard.It is neither prescribed in the Nabakalebara manual nor has got any religious sanction on it.The temple administration should not promote this.he said.He demanded a high level probe into it and to punish the guilty.In another development, Swadhin Kumar Panda, convener of Srikshetra Surakshaya Vahini and activists today demonstrated in front of the Sri Jagannath temple shouting slogans against the temple administration and filed an FIR in Simhadwar police station against the Chief Temple Administrator Suresh Chandra Mahapatra for gross mismanagement of the ritual hurting the religious sentiments of the devotees.Mahapatra old media persons that statements of all ten Biswakarmas, four Badagrahi Daitapatis entrusted to perform Brahma Parivartan, president and secretary of the Daitapati Nijog, Deula Karan and Chadhau Karan would be recorded in person and the administration would ascertain from their individual statements what exactly happened in the temple during the 15th June night causing inordinate delay in Brahma Parivartan and who were responsible.The Brahma Parivartan ritual scheduled for June 15 midnight was conducted on the afternoon of June 16 breaking the thousand year tradition.Mahapatra said stringent actions as per the law would be initiated against those found guilty.In another development, Congress demanded the resignation of Chief Minister Naveen Patnaik over the mismanagement in the Brahma Parivartan.The BJP demanded that Patnaik should apologise to the people for the irregularities and Temple Administrator Mahapatra be suspended forthwith.