Odisha lawyers to strike work in protest against Nabakalebara mismanagement 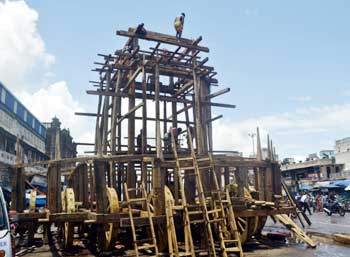 Odisha Channel Bureau Puri/Bhubaneswar, June 23: Lawyers across Odisha are set to strike work on Wednesday in protest against the gross violation of Nabakalebara rituals in Lord Jagannath temple in Puri.The Puri bandh call given by the Puri Bar Association demanding removal of Jagannath temple chief administrator Suresh Chandra Mahapatra, appointment of a high court Judge to probe into this Brahma Parivartan mismanagement and stringent action against the persons responsible for this mishap evokes promising response from the devotees and religious institutions, besides national political parties and lawyers across Odisha.The agitation is likely to spread to all parts of the State as the Bar Association of the Orissa High Court at Cuttack has also pledged their support to their Puri counterpart and resolved to abstain from work on Wednesday.The All-Odisha Lawyers’ Association too has extended its full support to the bandh and appealed to the lawyers across Odisha to strike work on Wednesday to highlight the demand for a judicial inquiry into the Nabakalebara fiasco.While opposition Congress had earlier demanded Chief Minister Naveen Patnaik’s resignation and a judicial probe into the mismanagement of the Nabakalebara rituals during shifting of the Brahma from the old idols to the new ones on June 16, BJP had demanded immediate removal of Mahapatra from the post of temple chief administrator.Both Congress and BJP have extended their support to the agitating lawyers over the issue.Apart from the shocked Jagannath lovers and devotees, Congress and BJP supporting the lawyers’ agitation is likely to make situation worse for the ruling BJD in the near future.This apart new revelation like use of cell phones by a number of Daitapatis during the Brahma Parivartan in the closed temple on June 15 night and allegedly taking pictures of secret practice has put the temple administration in a tight spot.The two Daitapatis as well as BJD leaders identified as initiators of the entire trouble during the Brahma Parivartan ritual has became a headache for the ruling party.The situation was likely to turn worse for the Naveen Patnaik Government as it had failed to take any action against anyone till date.The transfer of the Brahma from the old idols of Lord Jagannath, Lord Balabhadra, Devi Subhadra and Lord Sudarshan, which was scheduled to be conducted on June 15 night in a secret ritual, was conducted on June 16 afternoon due to differences between two groups of the Daitapatis who were scheduled to conduct the ritual.The BJD government was likely to face criticism from all quarters till the Rath Yatra or even till the Bahuda Yatra over the mismanagement in the Brahma Parivartan.