Simian menace on the rise in coastal Odisha

Odisha Channel Bureau Jagatsinghpur, July 3: The districts of Jagatsinghpur and Kendrapara in coastal Odisha that bear the brunt of frequent flood and cyclones are currently hit by another unexpected problem – the monkey menace. 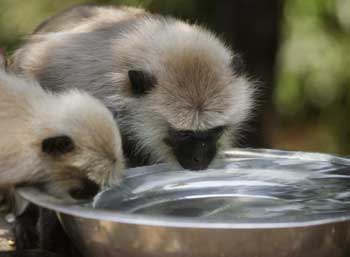 Attacks by monkeys in regular intervals have already made life hell for people residing in many areas of these coastal districts.Simian menace is beginning to emerge as a major headache for administrative authorities.Every month, officials are contending with complaints of rowdy monkeys letting loose vandalism sprees in both the urban and rural areas.“The administration is in receipt of grievances of simian menace from a number of places.As the state forest department has the expertise to contain such animal nuisance, we are seeking their assistance from time to time to drive the animals away from places of human habitations,” said Jagatsinghpur Sub Collector Narahari Sethy.The Collector of neighbouring Kendrapara district is forced to appeal the forest officials to put to an end to the ongoing spell of simian menace.“Reports reaching here from some parts including Kendrapara township indicate that monkeys are on rampage badly damaging the vegetable cultivation.Some of the schools are also hit by monkeys as the tree covers within the institution are ideal habitat for them.The animals trespass into classroom and trigger panic in children.In the process, the classroom studies in some of the schools are getting affected,” said Collector of Kendrapara Debraj Senapati.According to reports from these districts, in many areas fear of attacks by monkeys has already prompted parents to stop their children from going to school.Both these districts have been the worst hit by the unexpected problem.According to reports, more than 50 people, including some children, have suffered injuries by monkey attacks during the last two months.The monkey attacks are not confined to the rural areas alone.Hundreds of monkeys have turned the urban centres in the coastal districts such as Paradip, Kendrapara, Jagatsinghpur and Pattamundai urban local bodies as their permanent homes.Their intimidating presence is everywhere right from places of worships, schools, colleges to vegetable markets.They witty animals snatch away eatables, fruits, vegetables and Tiffin boxes at opportune moments.“Hordes of monkeys literally invade my residential quarters’ every day.During morning stroll, I used to carry a stick to save myself from possible attack,” observed Kendrapara Collector.”On the slightest opportunity, they would sneak into the house and take away cooked food and other eatables, including fresh vegetables, besides destroying household articles.Children are feeling unsafe because of these trespassers,” said Sulochana Behera, a homemaker of Kendrapara town.Sanatan Behera, a vegetable grower from Tirtol in Jagatsinghpur was skeptical of government inaction.“We are taking the monkeys’ nuisance in our stride.The administration is doing precious little to regulate the monkey menace.We are doing 12 hours’ watch in the fields right from dawn to dusk to keep the monkeys at bay.Still they have managed to do partial damage to vegetable fields.”Experts and animal activists attribute this violent behaviour on the part of the simian species to the heavy destruction of green cover in the region under the impact of the October 1999 super cyclone.The calamity had greatly reduced the tree cover in the coastal districts which resulted in loss of natural habitat and food for the monkeys.