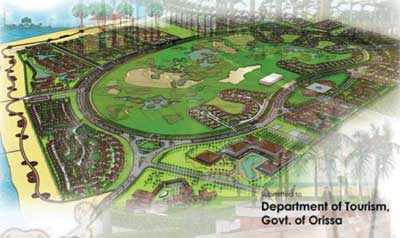 Odisha Channel Bureau Bhubaneswar, July 15: Eastern Zone Bench of National Green Tribunal has restrained the IDCO and District Collector of Puri from tree felling and construction activity for Shamuka beach tourism project in Sipasarubali area near Puri.The NGT granted the stay while hearing a petition filed by Prafulla Samantara, activist and president of Lok Shakti Abhiyan.Shamuka Tourism Project is an ambitious project of State Tourism Department for construction of luxurious hotels and golf course in an area of 920 acre in ecologically sensitive coastal areas of Puri.Counsel Sankar Prasad Pani, appearing for the petitioner argued that the ongoing construction work and tree felling in Sipasarubali for Shamuka Project is illegal as the project has not been granted Coastal Regulation Zone and Environment Clearance under Environment Protection Act, 1986.The petition further contends that around 28 percent of the total land is covered with trees which used to act as a barrier against cyclonic storms and coastal erosion and if the project is allowed then it will wreck havoc on the ecology of the area.IDCO had started tree felling for approach road and boundary wall from June 5 this year, ironically the day being the World Environment Day.Upon hearing the case, Justice P.K.Ray and Professor P.C Mishra admitted the case and asked the Chief Secretary, Odisha Government, District Collector and Superintendent of Police Puri, and Divisional Forest Officer, Puri to file status report and reply to the petition within four weeks.In the meantime all the construction as well as tree felling in the proposed Shamuka project area is being stayed till further order.The case will come up for further hearing in the Tribunal on August 21.Meanwhile, Samantara urged the State government to release all villagers including Batakrunsha Swain, convenor of Upakula Jami Jungle Suraksha Samiti, who have been detained by Puri police for opposing the beach tourism project.