Odisha Channel Bureau Cuttack, Aug 8: Odisha’s prominent self-styled godman Santosh Kumar Raul alias Sarathi Baba would be further questioned by the Crime Branch of Odisha police for three days from Sunday.An order in this regard was passed by Sub-Divisional Judicial Magistrate B.Gautam at Cuttack today.The court passed the order when the Crime Branch made a prayer in this regard when the accused godman was produced before him. 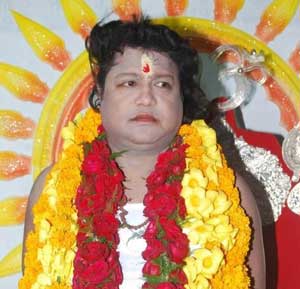 The Crime Branch requested the court to grant police remand for the accused for three days further his further questioning pertaining to his activities relating to accumulation of wealth, cheating and his sexual escapades.The court ordered that Sarathi be kept in judicial custody till Sunday after which the Crime Branch would take him for further interrogation for a period of three days.The fake Baba was ill-treated by some people when he was being produced before the court.While accepting the Crime Branch prayer for police remand of the accused godman, the court ordered that he the Baba be remanded to judicial custody for one day.Accordingly, the godman was lodged in the Choudwar jail.The Crime Branch has also started investigating into the complaint filed by the girl who alleged accompanied Sarathi to Hyderabad, Jaipur and Kolkata in July this year.The girl in question happens to be student of SCB Medical College and Hospital at Cuttack.Sarathi was taken into custody by the Crime Branch at 3.30 am at his ashram at Barimula near Kendrapara town and brought to Cuttack for questioning.He was arrested after his statement was recorded with regard to various charges being levelled against him. Earlier in the day, the six-member Special Investigation Team (SIT) of the Crime Branch had a marathon interrogation of Sarathi Baba after he was brought from his ashram to the Crime Branch headquarters here in the early morning.