Odisha Channel Bureau Angul: Odisha Pradesh Congress Committee today began its statewide Jagaran Yatra with the sole aim of exposing the Naveen Patnaik Government that is thriving in power for 15 years by making tall promises while the administration is crumbling at all levels.The Jagaran Yatra that kicked off from Dhokuta village of the district will be held in 10 phases across the State till April next year. 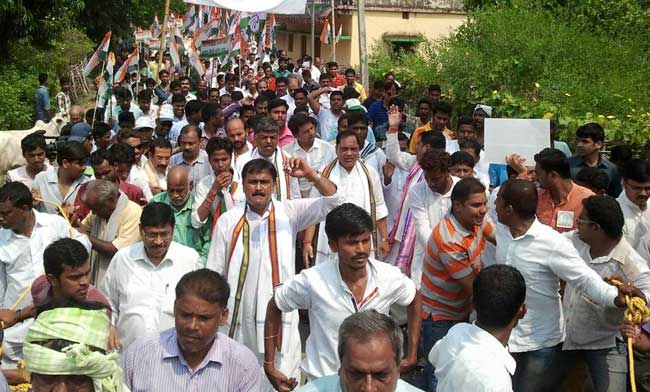 Apart from highlighting the BJD government’s failures on various fronts, the party is trying to make the people living in the rural areas of Odisha aware of the lack of sincerity on the part of Chief Minister Naveen Patnaik to solve the problems facing the State.The padyatra, which was led by OPCC president Prasad Harichandan, attracted over 10,000 villagers who joined the Congress leaders and workers spontaneously.The padyatra will be held in neighbouring Dhenkanal district on Thursday.It is being attended by almost all the senior leaders of the party in the State.Harichandan has given the slogan “Banchiba Pain Ladhai Kara, Congress Pataka Hatare Dhara”, urging people to join the Jagaran Yatra in the coming days to help Congress emerge as the lone alternative to the ruling BJD.While the healthcare system is in shambles, the situation is no better in education and agriculture or power sector, Harichandan has said, while blaming the government for the frequent suicides by farmers in different regions of the State.The successful launch of the Jagaran Yatra had its impact within no time.As the party highlighted the plight of the farmers, the State Government soon announced drought relief package and aid to drought-hit farmers.