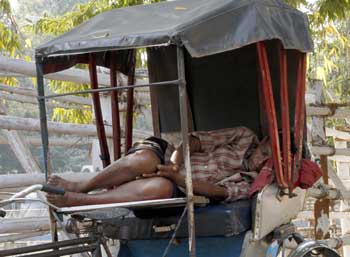 Odisha Channel Bureau Bhubaneswar: As the people of Odisha celebrated Pakhala Divas, the Capital city of Bhubaneswar recorded the season’s highest maximum day temperature of 41.7 degrees Celsius on Sunday.As heat wave condition started gripping the State, the other places such as Bhawanipatna, Balangir, Titilagarh and Malkangiri experienced 40 degrees Celsius and more during the day. While Talcher recorded 39.2 degrees Celsius, the other places which recorded 39 degrees Celsius or more in Jharsuguda 39.3 degrees Celsius, Angul 39.7 degrees Celsius, and Chandbali 39 degrees Celsius. Malkangiri had recorded 40.2 degrees Celsius, the highest temperature in the State, on Saturday. Bhubaneswar had recorded 40.9 degree Celsius temperature on February 20 this year and the temperature had decreased marginally during the subsequent days.Due to scorching heat, a majority of people stayed indoors and the roads in the Capital city wore a deserted look during the afternoon hours.The celebration of Pakhala Divas in many homes saved the situation as Pakhala is considered to be the right food to beat the heat.People in many homes have already started consuming Pakhala since the past few days.The same is likely to continue for many more weeks as temperature has started increasing across Odisha.Meanwhile, drinking water crisis is looming large with the water sources getting dried up in many regions across the State.