Odisha Channel Bureau Bhubaneswar: The annual Akshaya Tritiya festival was celebrated with traditional fervour and enthusiasm across Odisha on Monday as the farmers began their new crop season by sowing rice seeds, and the process started for making of the chariots for the next Rath Yatra of Lord Jagannath in Puri.As the day is also celebrated as Farmer’s Day by the Odisha Government, the three main political parties such as Biju Janata Dal, Congress and BJP organised programmes where their top leaders were seen sowing rice seeds to mark the occasion. 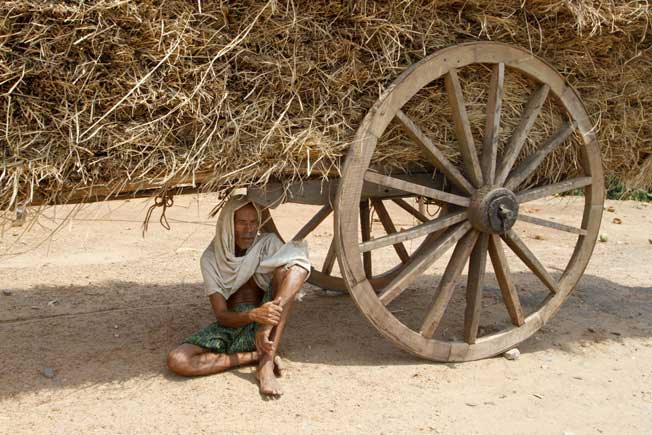 While Chief Minister Naveen Patnaik performed the Akhi Muthi ceremony in Pipili area on behalf of the BJD he heads, Odisha Pradesh Congress Committee president Prasad Harichandan sowed rice seeds at Budhipada village on the outskirts of Bhubaneswar.Union Minister of Agriculture, Cooperation and Farmers Welfare Radha Mohan Singh and Petroleum and Natural Gas Minister Dharmendra Pradhan attended a similar ceremony at Kandarpur in Cuttack district.Patnaik announced the direct benefit transfer scheme for the farmers of the State under which farmers can receive various subsidies.Though more than 200 farmers had committed suicide in Odisha due to crop loss and debt burden since September, 2015, the Naveen Patnaik Government, however, has not admitted that even a single such suicide had taken place for crop loss due to drought or loan burden.No compensation has been paid by the Patnaik Government to the next of kin of the distressed farmers who ended their lives till date.Patnaik, however, has been claiming credit for making a separate budget for agriculture though it has been able to do little for the distressed farmers apart from announcing new schemes for the farmers and development of agriculture.As Akshaya Tritiya was celebrated across Odisha with the drought-hit farmers embarking on a new crop season with new hopes, thousands of people entered their newly-built houses and started any new project.On the other hand, jewellery shopkeepers did brisk business during the day when people thronged the jewellery shops to buy gold or other jewellery.The front pages of almost all daily newspapers published in Bhubaneswar on Monday morning had advertisements to attract people to buy jewellery on the occasion of Akshaya Tritiya, which is considered as an auspicious day.In Puri, carpenters embarked on the task of cutting and shaping wood to make three grand chariots for Lord Jagannath, Lord Balabhadra and Devi Subhadra for the ensuing Rath Yatra or car festival.The nine-day-long Rath Yatra would commence on July 6, 2016.Akshaya Tritiya, also known as Akha Teej, is a holy day for Hindus and Jains across India.It falls on the third Tithi of Bright Half of the pan-Indian month of Vaishakha and one of the four most important days for Hindus, according to Wikipedia.