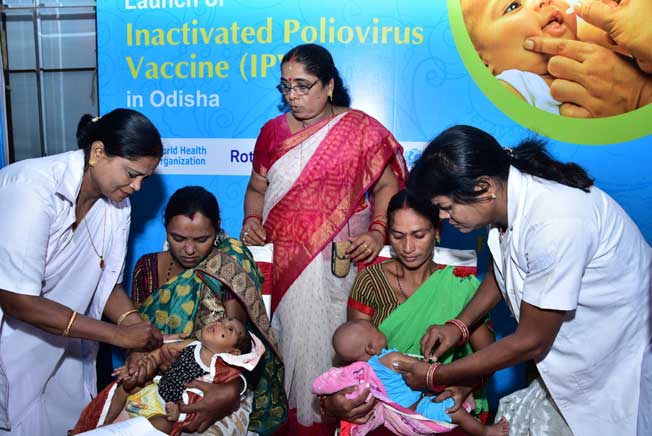 Odisha Channel Bureau Bhubaneswar: The inactivated poliovirus vaccine (IPV) that provides children with additional protection against polio was launched in Odisha by State Health and Family Welfare Minister Atanu Sabyasachi Nayak on Wednesday.The IPV vaccine (injectable) protects children against all three forms of poliovirus and when used in combination with Oral Polio Vaccine (OPV), serves the dual purpose of quickly boosting the child’s immunity to polio, thus boosting overall population immunity and helps in preventing any possible polio outbreak in the country.In line with India’s commitment to the Polio Endgame Strategic Plan (2013-2018), two fractional doses of IPV are being introduced into the routine immunization programme in eight states – Odisha, Andhra Pradesh, Tamil Nadu, Karnataka, Kerala, Telangana, Maharashtra and Puducherry.The dose will be administered to children at 6 and 14 weeks along with the first and third dose of OPV and Pentavalent Vaccine.In cases where immunization is delayed, the child can be given IPV up to one year of age.In Odisha, around 853,000 children between 0-1 years will be targeted annually through immunization sessions held in all health facilities and government hospitals every month across the State.The introduction of IPV in the state is part of a series of new initiatives to improve child mortality, jointly introduced by the Ministry of Health & Family Welfare, Government of India and Department of Health & Family Welfare, Government of Odisha.New effective vaccines are already introduced in phased manner in the Universal Routine Immunization program state-wide, such as the Pentavalent Vaccine in October 2015 followed by Rotavirus Vaccine in March 2016 and Bivalent Oral Polio vaccine in April 25, 2016.