Odisha Channel Bureau Bhubaneswar: The National Confederation of Human Rights Organisations (NCHRO) has demanded withdrawal of all paramilitary forces from the Niyamgiri hill areas in order to ensure safety of the local Adivasi population.NCHRO has made the demand in a report prepared by an all India fact finding team that it had formed to inquire into the atrocities committed by the police and armed forces stationed in Kalahandi and Rayagada districts of Odisha. 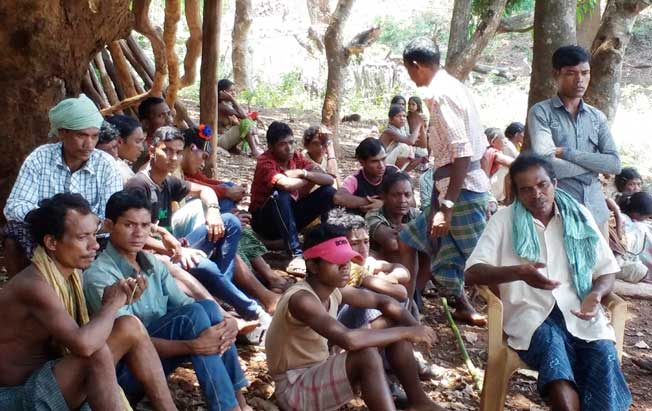 The fact finding team comprised Amarx Marx, chairperson of NCHRO, Reny Ayline, national secretary of NCHRO, Narendra Mohanty, national executive member of NCHRO, A.Momen Halder from West Bengal unit of NCHRO, and Abdul Hannan, student activist from Jharkhand.The team prepared its report after visiting a number of tribal villages and met the people affected by alleged State atrocities.It also met some social and tribal activists of Odisha.The team also spoke with the Superintendants of Police of Rayagada and Kalahandi districts and the Sub-Inspector of Lanjigarh police station.They demanded that a case of kidnapping of Baka Majhi of Nachiniguda village should be registered either by the Lanjigarh or Bijepur police.The Kalahandi district police administration should form a special squad to find the whereabouts of Baka Mahji.“The Rayagada district police seems to close the case related to the fake encounter killing of Manda Kadraka as a death due to a real encounter between the forces and an armed terrorist.Whether that small boy was involved in Maoist activities are not the forces have no right to kill him.We demand a CBI enquiry regarding this.A Special Investigation Team (SIT) should be formed to investigate the recent killings and disappearances of Adivasi people of this area.We demand the immediate and unconditional release of the tribal activist Dasru Katraka who was falsely indicted and arrested,” they said in the report.While demanding withdrawal of all paramilitary forces from the Niyamgiri hill areas to ensure the safety of the local Adivasi population, they further demanded that basic amenities should be provided in all the 112 villages of Niyamgiri hills.“But we want to stress the point once again that any development activities in this area should be made after due consultations with the local people,” they noted.“We demand that in the background of the historic May 6 verdict of the Supreme Court the government should ensure the implementation of the Gramsabhas’ decision of 2013 and declare Niyamgiri as a mining prohibited zone.“We also demand that in the background of the recent developments the activities of the notorious multinational mining company Vedanta Resources should be brought to an end in this area.The company had already accepted its defeat in its fight against the local Adivasis and decided to close its venture which is running with a huge loss.It is high time that the Central and State governments should stop their corporate friendly attitude towards the Vedanta resources and ensure its immediate and total closure,” they said in the report which they released at a press conference in Bhubaneswar on Tuesday.