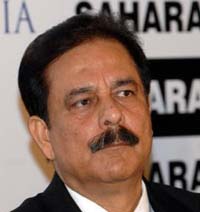 Odisha Channel Bureau CUTTACK: Sahara India Pariwar chairman Subrata Roy’s `Abhaar Yatra’ ran into rough weather in Odisha on Sunday after the Police Commissionerate of twin cities of Bhubaneswar-Cuttack cancelled his meeting in this Millennium City apprehending law and order situation.The Pariwar had spent lakhs of rupees in putting up hoardings across the two cities to welcome the self-proclaimed Saharasri.Roy, who is on parole, was scheduled to attend the meeting at the indoor stadium in the city to express his gratitude to hundreds of agents of his Pariwar for standing by him during the difficult times. The whole exercise, however, ended after police apprehending protests from depositors of the company.Prohibitory orders under Section 144 of the CrPC were imposed by the police and the agents were asked to leave the indoor stadium, venue of the meeting.Lakhs of small depositors who have been cheated by various companies were also critical of the event, and the administration did not want to provide adequate security for Roy’s meeting since the event could have ended up in bringing the controversial chit fund scam into focus again, according to sources.Meanwhile, Roy, who had arrived in Bhubaneswar on Saturday, issued a statement from a hotel in the Capital city clarifying his stand. “I am very happy to be in this beautiful city Bhubaneswar.“It is very unfortunate that I could not meet around 3000 Pariwar members in Cuttack. We had permission but at the last moment Section 144 has been imposed.I must appreciate Bhubaneswar Police of all levels, upto highest level who were all so nice to us and took care of us.As we learnt from Police that some forum has threatened to do agitations and they shall try to disrupt our meeting in Cuttack,” said Roy.“Police administration very rightly took the decision otherwise our 3000 youths would have lost their temper and could be a big law and order problem.“As responsible citizen we should co-operate Police administration for maintaining peace.“I shall definitely request Forum people to remember the truth that good can never be compared with bad.It is pertinent to note, that Sahara’s financial services neither was nor is in any chit fund business.“As I am asked not to meet media, so I am deprived of meeting my media friends,” said Saharasri Subrata Roy Sahara in a statement issued by Sahara Corporate Communications.