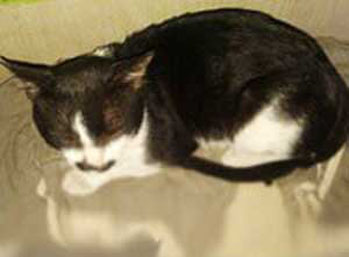 Odisha Channel Bureau
CUTTACK: After careful deliberation by judges from People for the Ethical Treatment of Animals (PETA) India and hundreds of votes to help them decide who they should choose to win, Baba Ghanush, whose guardian is Abhishek Prusty of Cuttack, has been named the second runner-up in PETA’s Cutest Rescued Cat Alive contest – just in time for International Homeless Animals’ Day (20 August).Baba Ghanush had earlier edged out hundreds of other lovable rescued cats to become one of 10 finalists.The winner of the contest is Whini, whose guardian is Swetha Priya of Chennai.

And the first runner-up is Mustard, whose guardian is Nandini Baruva of Guwahati.”Baba Ghanush proves that adopting a cat from the streets or an animal shelter can fill your life with joy and love that words can’t express”, says PETA CEO Poorva Joshipura.”Although only one cat could win PETA’s contest, all rescued cats are winners because they have found loving homes.” Prusty rescued Baba Ghanush after he was bitten by a dog.Now he is healthy and loves to play and cuddle.”He once [got bitten] by a dog”, says Prusty.”We fended off the dog and rescued him.He is strong.” PETA points out that pet shops and breeders often keep animals in dismal conditions and contribute to the companion-animal overpopulation crisis by churning out animals to sell.Animals purchased from pet shops are also often bought on impulse and discarded when buyers tire of them.PETA created the contest to show that the kindest thing that a prospective guardian can do is to adopt a lovable cat from the streets or an animal shelter.

Prusty will receive a certificate, a copy of PETA founder Ingrid Newkirk and Jane Ratcliffe’s book One Can Make a Difference along with a cute cat toy for Baba Ghanush.The top three cats will appear in an upcoming issue of Animal Times, PETA’s magazine for members.The winner and runners-up were selected by PETA based on several factors, including vote count.