Odisha Channel Bureau
BHUBANESWAR: People across the western region of Odisha celebrated Nuakhai, a major agrarian festival in Odisha – with religious fervor and traditional gaiety on Tuesday.This annual harvest festival is celebrated a day after Ganesh Chaturthi. The celebrations began with the offering of ‘Nabanna’ – new rice cooked out of the newly harvested paddy crop – to Maa Samaleswari Devi in Sambalpur early in the morning.Later, people offered ‘Nabanna’ to their presiding deities in all the western Odisha districts. 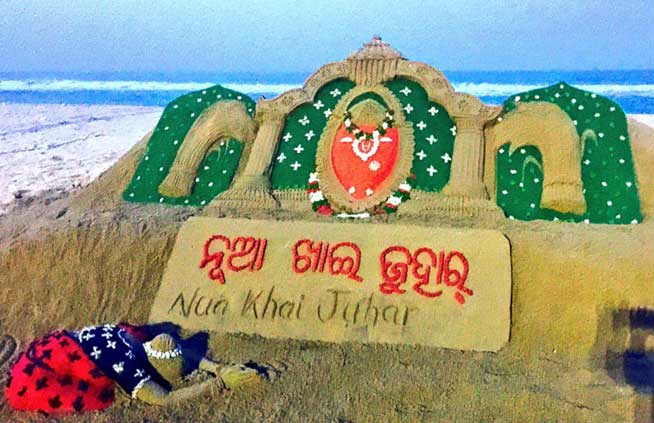 Apart from Maa Samaleswari in Sambalpur, Nabanna was also offered to Manikeswari in Kalahandi, Pataneswari in Balangir, Sureshwari in Subarnapur, and Sekharbasini in Sundargarh.Similar rituals were also conducted before the Gram Devi, presiding deity of the villages in the entire region.Nabanna is offered to the Mother Goddess to seek Her blessings for a bumper crop in the next harvest season.Those belonging to western Odisha, but living in other parts of the State, particularly in the Capital city Bhubaneswar, also celebrated Nuakhai in with similar enthusiasm.The festival was also celebrated in New Delhi and any other cities across India and abroad by the people who take pride in being from the region.Also referred to as Nuakhai Parab or Nuakahi Bhetghat, #NuakhaiJuhar started trending on Twitter since morning with people across the State, including those belonging to other regions of Odisha, greeting each other and wishing each other progress and prosperity.A sand sculpture by well-known sand artist Sudarsan Pattnaik on Puri beach on the eve of the festival and retweeted and liked by thousands of people with the #nuakhai hastag.Thousands of people active on Facebook also greeted each other with great enthusiasm.The politicians cutting across party lines too greeted the people on the occasion of Nuakhai festival.

Apart from greeting people on social media sites, many politicians issued advertisements in daily newspapers wishing the people on the occasion.