Odisha Channel Bureau
BHUBANESWAR: The two top leaders of Navnirman Krushak Sangathan (NKS), who were arrested eight days ago after they announced to hold a farmers’ rally in Bhubaneswar, were granted bail by a Bhubaneswar court on Monday. 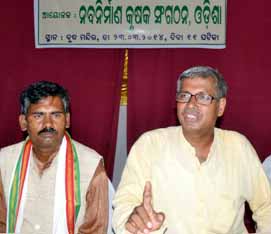 The leaders – convenor of NKS Akshaya Kumar and top youth leader of NKS Seshadev Nanda – were arrested on December 12, the day they announced that a farmers’ rally will be organised by them on December 14.

The two main leaders of the NKS were had been kept in judicial custody after their arrest. Farmers from different districts who had started from their homes in far flung areas were, however, stopped by the police on their way to Bhubaneswar.The agitating farmers were to converge in Bhubaneswar city to demand for price, prestige and pension for farmers by staging a rally outside Odisha Assembly.No farmer was allowed to enter Bhubaneswar on December 14 as hundreds of policemen prevented the farmers to enter the city. Hundreds of farmers were taken into custody and released late in the afternoon that day.

Congress, BJP and other opposition parties and many mass organisations and human rights bodies had condemned the arrest of Kumar and Nanda.Their arrest was also criticised by Congress and BJP MLAs inside Odisha Assembly.