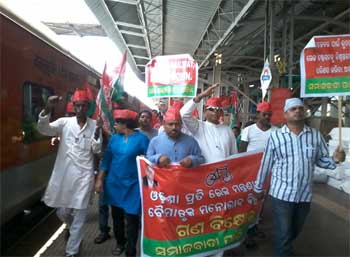 Odisha Channel Bureau Bhubaneswar, July 9: Legislators as well as the youth workers of the Biju Janata Dal on Wednesday accused the Narendra Modi Government of neglecting Odisha in the railway budget.While BJD legislators stood up and displayed placards denouncing the railway budget during the zero hour in the State Assembly, members of the BJD’s youth and student wings staged dharna outside Bhubaneswar railway station criticising the Centre for no allocating sufficient funds for the State in the railway budget.The legislators also staged a dharna near the statue of Mahatma Gandhi in the Assembly premises and raised slogans against the Modi Government alleging that Odisha had been neglected in the railway budget.The youth and student wings also organised dharnas outside various railway stations in different parts of the State.Similar protest dharnas will be organised by the youth and student wings of the BJD on Thursday and Friday.Interestingly, Chief Minister and BJD president Naveen Patnaik had not criticised the railway budget in any manner while giving his reactions to the rail budget proposals on Tuesday.While the BJD Government had requested for projects worth Rs.3160 crores, a sum of Rs.1420 crores was allocated in the railway budget for various rail projects.Meanwhile, the leaders and workers of Odisha unit of the Samajwadi Party also staged a protest at the Bhubaneswar railway station alleging that Centre had shown its step-motherly attitude towards Odisha by not allocating sufficient funds for development of railway infrastructure in the State.