Odisha turning into a haven for idol smugglers

Odisha Channel Bureau
Bhubaneswar: The Indian National Trust for Art and Cultural Heritage (INTACH) held its annual conference of its State Conveners here on Friday. Speaking at the occasion, the Conveners from different chapters expressed their grave concerns on the rising cases of temple thefts from all over the State.

Digamber Mohanty of the Bhadrak Chapter said that INTACH has brought to light many instances for idol theft and even registered FIRs with the respective police stations, but to no avail. There have been 20 cases of idol theft in the last decade in Bhadrak district, but not one single recovery made. 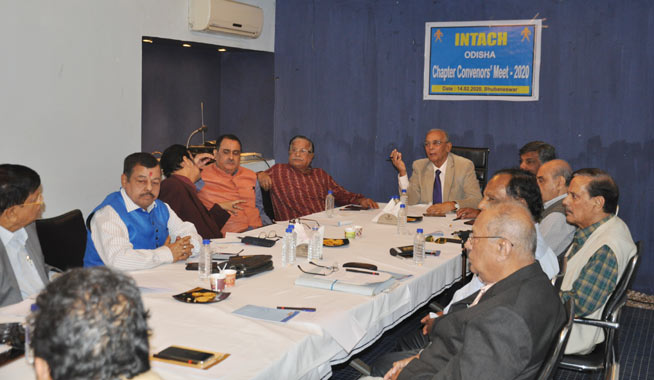 State Convener Amiya Bhusan Tripathy, who is also the former DGP of Odisha, lamented that there is an absolute lack of awareness and gross apathy regarding the intrinsic value of these idols which represent the rich cultural heritage of the State. The prevailing laws intended to prevent idol thefts and burglary are inherently ineffective. A holistic National Heritage Protection Policy and System should be put in place. There is no true objective data base for all the antiques, both stone and metallic idols in the approximately 22,000 ancient places of worship in Odisha. It is true that more than 95% of the antique idols in these temples remain legally unregistered as the National Mission on Monuments and Antiquities remains incomplete.

Tripathy said that inconsequential and weak legislations like the Antiquities and Art Treasures Act, The Ancient Monuments and Archaeological Sites and Remains Act and the Ancient Monuments Preservation Act, 1904 are ineffective to curb these crimes. New legislation and amendments are the pressing needs of the hour. The State Police should have a separate wing for dealing with such crimes.

According to Anil Dhir, who had recently made the report on the Antiquities of the Prachi Valley, more than 300 valuable idols were found missing in the different places during his survey. He said that idols which had been photographed and documented by scholars in the last three decades have vanished. Dhir reported that nearly 48 FIR’s had been filed in different Police Stations of the Prachi valley in the last decade, only one recovery has been made. Precious Jain and Buddhist idols have vanished in the last decade. Many rare sculpted pieces are lying in abandon and in the open. In the Buddhist sites of Ratnagiri and Lalitagiri, many of the votive stupas have been stolen and removed from their original places.

Dhir said that proper methods should be adopted as per international norms to discourage this rampant illegal trade. The metal idols should have laser markings as the base as evidence of ownership. In the event of theft, this will be evidence. The stone idols should have metallic engraving at base having the name of the temple and the place. The State Archaeology Department should develop a data base by photographing and documenting the physical dimensions of the antique idols including their specific identifying features. There have been many instances where recovered stolen idols could not be traced back to their original places, and are lying in different police malkhanas and the ASI godowns. Last year, two Asthadhatu images dating back to the 11th Century were recovered by the Crime Branch from the outskirts of Bhubaneswar, the decoy used by the police was asked to pay Rs. 2.5 crore for them.

Dhir said that Odisha has become a major hub for illegal idol exports as container shipment is facilitating their exit by sending the stolen items along with the recently made statues and idols. The authorities should ensure that a Clearance Certificate is obtained for all idol exports from a competent agency.

Baikuntha Panigrahi, Bhubaneswar Convener said that INTACH has undertaken the listing and documentation of monuments in all its chapters and published nearly two dozen reports. The Jajpur Chapter has documented 550 heritage sites, Bhadrak had documented 200 sites and the Balasore Chapter has undertaken 300 different listings.

Besides documenting the monuments of the Old Jagannath Sadak, a comprehensive and detailed report of the Antiquities of the Prachi Valley have also been completed. Listing of the sites of Balangir, Ganjam and Sonepur are also underway.

The Mahanadi Project, which was flagged off in Jan 2019, is a flagship project in which all the tangible and intangible heritage of the River Basin is being documented. Nearly 1000 monuments have been identified, which even include the temples that are in the submergence area of the Hirakud reservoir, according to a press release issued by INTACH on Saturday.