Santosh Patnaik
Vijayawada: YSRCP Government in Andhra Pradesh on Tuesday launched yet another populist scheme by offering loans at zero interest to farmers.

He said the milk procurement in association with Amul would begin from November 26 in three districts in the first phase. 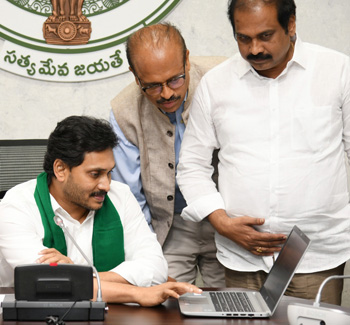 Addressing the beneficiaries and officials on video conference mode, Reddy said the government had been giving priority to farmers. Since June 2019, YSRCP Government had taken up unique programmes for the first time in the country. The timely subsidies had been creating confidence among the farmers.

Reddy said the government was providing input subsidy to the farmers to cover the losses. The subsidy for Kharif losses between June and September has already been paid, which was about Rs 135.73 crore benefitting 1.66 lakh farmers. For the month of October, Rs.132 crore input subsidy was credited now.

The State has signed a MoU with Amul and the milk procurement would begin from November 26 in the three districts of Prakasam, Chittoor and Kadapa. This would be extended to other districts as well to help dairy farmers and women self-help groups. In all, around 9,800 Bulk Milk Cooling Units (BMCU) will be set up across the State.

About 90 per cent of the election promises were fulfilled during the 18 months in office, the Chief Minister said. He blamed the erstwhile TDP Government for leaving a huge financial burden by not clearing dues to various sections.