After rejection of an adjournment motion, TDP member N. Rama Naidu was suspended for standing before the Speaker’s podium and shouting continously. He strongly raised his protest over delay in payment of aid to victims of recent spell of rains. 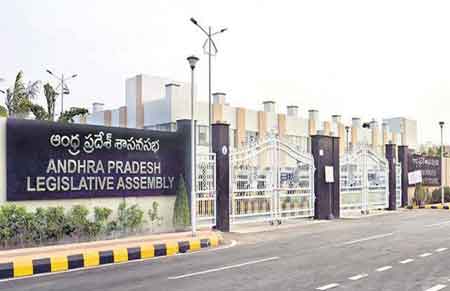 On the day-1, Leader of Opposition N. Chandrababu Naidu and 12 other members belonging to his party were suspended for a day for staging sit-in in the well of the House. They had interrupted when Agriculture Minister K. Kannababu was explaining about crop insurance and other schemes.

Naidu alleged that the YSR Congress Party Government headed by Y.S. Jagan Mohan Reddy had failed miserably in coming to the rescue of farmers at the time of distress caused by rain and Covid-19 lockdown.

In a series of tweets, YSRCP parliamentary party leader V. Vijayasai Reddy alleged
that Naidu, who made AP capital of farmer suicide during his tenure was now shedding crocodile tears for the ryots. He said Naidu had commented that farming was waste and had refused to give ex gratia to those who died in police firing during their protest over power tariff hike at Basheerbagh.

Blaming TDP members led by Naidu for indulging in drama in the Assembly to gain cheap mileage, Jagan Mohan Reddy said he was a man of words and explained how he had fulfilled almost all the promises made during the elections.

Speaker Thammineni Seetaram also found fault with TDP members for not adhering to established parliamentary practices and regularly trying to stall the House proceedings instead of taking part in healthy debate.