The project was virtually launched at Tadepalli near here. The project will cover 400 villages spread over three districts in the first phase.

Speaking on the occasion, Reddy said that the State Government wanted to give a better price to milk cooperatives to create competition in the market. Private diaries would eventually come forward and pay more.

The project stemmed out of the plight expressed by dairy farmers during 3,648 km padayatra who said the price of one litre water bottle and one litre of milk was the same.

The State signed MoU with Amul on July 21 to strengthen milk cooperatives. 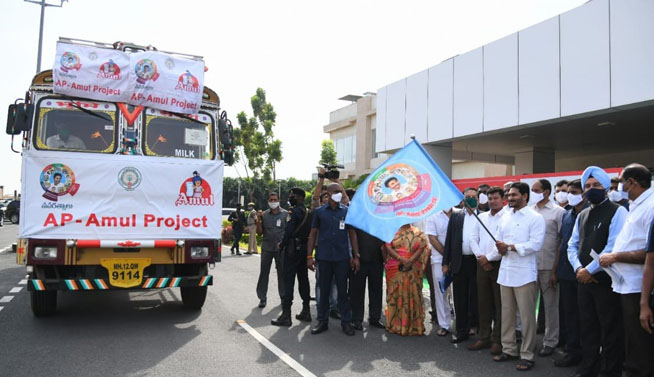 Amul, which is a result of successful cooperative movement, pays more than the existing price per litre and the profit earned is distributed among the stakeholders periodically. It stands eighth in the IFCN ‘s ranking.

Through AP-Amul project, 9,899 villages across the State will be brought under milk production. It is proposed to set up Bulk Milk Chilling Units (BMCU) and Auto Milk Collection Units (AMCU) with an expenditure of Rs 3,000 crore under the project.

It is expected to empower women from the rural areas for the 20-30 years, providing a recurring income resource and a sustainable livelihood. In the first phase, milk collection takes off in 400 villages in Prakasam, Chittoor and Kadapa districts and within 10 days of milk collection the amount will be directly credited into the farmers’ accounts.