Santosh Patnaik
Visakhapatnam: Tribals on both sides of Andhra Pradesh and Odisha see a ray of hope for hammering out a solution to the inter-State land dispute near here as a joint survey began since Thursday.

The differences over jurisdiction near Araku Valley, about 120 km from Visakhapatnam and near Padua of Odisha aggravated with officials from the two States removing the border markings. Some tribal organisations also staged dharna to press for action against land grabbing by their neighbour. 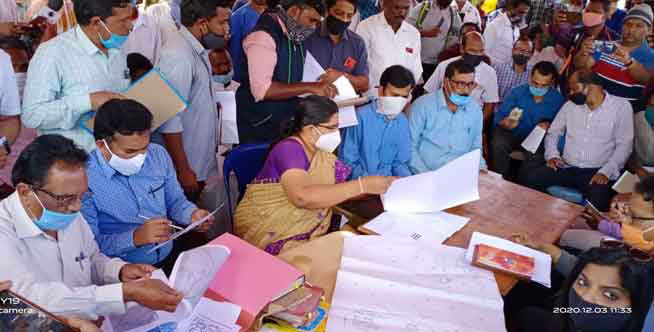 While Chintapalle and Anantagiri hills of AP have huge bauxite deposits, the disputed land in question is said to have some granite and quartz mines.

The bone of contention was with regard to an area on the border which Odisha claimed part of Sunabeda village of Sampai panchayat in Pottangi block of Koraput district. On the other hand, AP officials claimed it as part and parcel of Kolaput panchayat of Dumbriguda mandal (block) of Visakhapatnam district.

The tribals from both the States who speak Koraputia adivasi dialect cross the borders by trekking a few kilometers to buy provisions and to take up daily wage agriculture work under MNREGA as per their convenience.

The Koraput Collector and the Revenue Divisional Officer from Visakhapatnam took part in the survey. Coinciding with the launching of survey, activists of AP Girijana Sangham organised a protest and submitted a representation stating that there was no genuineness in Odisha’s claim on revenue collection before AP was formed.

According to them, entire Araku area was under Jeypore royal family control before AP was carved out of Madras Presidency. While Odisha became a State in 1936, AP was formed in 1956.

“We want an amicable solution to the problem as per boundary markings drawn in 1956,” AP Girijan Sangham vice-president Killo Surendra told Odisha Channel on Friday. He said politicians from both the States should not rupture friendly relationship by raking up border dispute without valid grounds.

Koraput MP Saptagiri Ulaka sought early solution to the stand-off and threatened that he would undertake a march to the border area to stage a protest if the issue was not sorted out immediately.