Santosh Patnaik
Vijayawada: In a first of its kind, Andhra Pradesh will conduct a comprehensive land survey in collaboration with Survey of India by using Drones and latest gadgets. 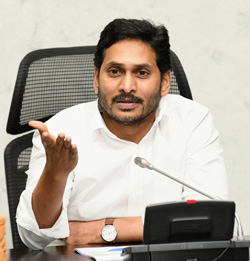 AP on Wednesday signed MoU in the presence of Chief Minister Y.S. Jagan Mohan Reddy for the implementation of the ‘YSR Jagananna Saswatha Bhoomi Hakku-Bhoomi Rakshana’, scheduled for launch on December 21.

The Chief Minister said the State Government in partnership with Survey of India would conduct the survey to go down in history with the golden letters. This would be first time for any State to undertake such a large-scale survey for the first time in the country after almost 100 years. The State and Survey of India will set up 70 base stations to take up the survey.

The Chief Minister said that all the measurements would be highly accurate. State-of-the-art facilities are being used with the latest CARS technology, drones, and rovers. Further, the Chief Minister instructed the officials to take up awareness campaigns on the initiative to educate people and also directed the District Collectors to be responsible for the survey project.

About 14,000 surveyors have been appointed by the State Government and 9,400 of them have already undergone training by Survey of India. For the remaining people, it will be completed by January 26.

The survey will be conducted in 1.26 lakh sq. km across the State except forest lands in three phases.

The Chief Minister said that the comprehensive land survey would benefit the people in all ways. The survey is being taken up after a long due, where sub-divisions and distributions were not registered at field level in the last 100 years.

A land titling card which consists of a unique identification number, measurements of the property, name of the owner along with the photo, and the total area would be given after the survey.

Digitised Cadastral Maps would be prepared after the completion of the survey. All details of the lands in the village would be on the maps. Survey stones would be installed once the marking of land is completed, the Chief Minister said.