He visited the samadhi of his father Y.S. Rajasekhar Reddy at Idupulapaya and later took part in Christmas celebrations along with wife Bharathi Reddy and other family members. 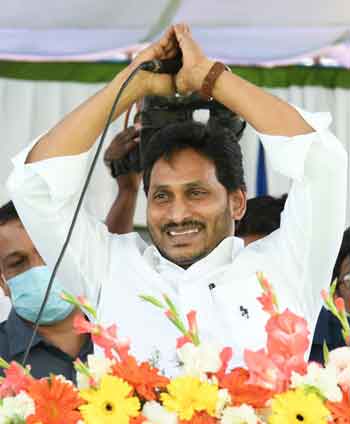 The Chief Minister laid foundation for the RTC bus stand, depot with Rs.34.20 crore, along with a new building for BC welfare girls’ residential school and other development works of local temples. Also, a foundation stone was laid for the 76 new BT roads which are being undertaken under the Pulivendula Area Development Authority, Gandikota-CBR, Gandikota-Paidipalem lift scheme, and for the construction of four model police stations.

Addressing the gathering, the Chief Minister said the projects initiated in 2019 had been progressing well, where the works of YSR Government Medical College would take off from February. He said that the works of 132 KV substation in Nallacheruvupalle village were underway and promised to start the irrigation and drinking water works in uranium-affected villages at the earliest.

Besides these, additional buildings will be constructed at the JNTU Engineering College and a new building for Vempalle Degree Colleges will also be established.

Further, the bed capacity of the community hospital in Vempalli will be increased from 30 to 50. The Chief Minister stated that 18 new temples would be constructed alongside the development of 51 existing temples and the works of integrated sports complex were underway in Pulivendula.

Reddy said the lift irrigation works on Gandikota Reservoir would start in March and carry out the micro irrigation works with Rs.1256 crore. He said that it was hard to maintain the full capacity water level of Srisailam barrage in order to take water through Pothireddypadu.

The previous Telugu Desam Government failed to provide R&R for Gandikota and thus the reservoir was never filled to its full capacity of 26 TMCs.

He said the State Government had paid Rs.665 crore for rehabilitation and filled the reservoir with 26.85 TMC of water. Similarly, for Chitravathi reservoir, the State Government paid Rs. 247 crore under R&R and filled it with 10.13 TMC. The Chief Minister directed the authorities to resolve the R&R problems of the displaced families Gandikota and Chitravati projects.