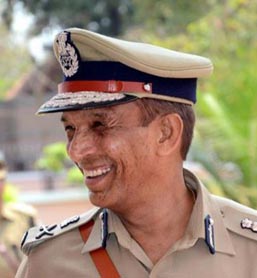 Odisha Channel Bureau Bhubaneswar, July 18: Odisha Director General of Police Sanjeev Marik on Friday said that Maoist leader Sabyasachi Panda, who was arrested earlier in the day, was involved in as many as 61 cases.While there were 21 cases in Rayagada district, there were 25 cases against him in Gajapati district, nine in Nayagarh district, two in Ganjam district and one in Berhampur.Marik informed journalists at a press conference in Bhubaneswar that Panda was arrested from Bada Bazaar area of Berhampur town at around 1 am from a house where he was alone.One revolver, 10 mobile phones, one laptop, 500 grams of gold, two lakh rupees in cash, two hard discs and five pen drives were recovered from the possession of the Maoist leader.Panda was behind the killing of 25 security personnel and 34 innocent common people, Marik said.The major cases against him include killing of Vishwa Hindu Parishad leader Swami Lakshmanananda in Kandhamal district in August 2008, arms loots in Nayagarh and Gajapati districts, and abduction of two Italians in Kandhamal in 2012..Marik termed the arrest of Panda as a major achievement for the State police.He thanked the intelligence wing of the police for their work that led to the arrest of the most wanted Maoist leader who was carrying a cash reward of Rs.5 lakhs.Sabyasachi Panda was active in Maoist activities since 1995 and had strengthened the party’s organization in several districts including Rayagada, Gajapati, Ganjam, Kandhamal and Nayagarh.Panda had also strengthened the people’s organisations such as Chasi Mulia Adivasi Sangha and Kui Labanga Sangha in those districts, the DGP informed.Sabyasachi was first the secretary of the Vanshadhara Ghumusar Division of the Communist Party of India (Maoist) and later worked as secretary of the Odisha State Organising Committee of the CPI (Maoist), Marik said.Panda, who had formed the Odisha Maovadi Party after his expulsion from the Communist Party of India (Maoists) in 2012, had reportedly a another new party named the Communist Party of India (Marxist-Leninist-Maoist) a few months ago.