Sabyasachi wanted in over 100 cases 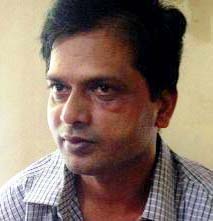 Odisha Channel Bureau Berhampur, July 18: Top Maoist leader of Odisha Sabyasachi Panda was accused in more than 100 cases, the Berhampur police said on Friday evening.Out of these cases, the highest of 42 cases were pending against Panda in Gajapati district, while 21 cases were pending in Kandhamal, 20 in Ganjam, 18 in Rayagada 18, nine in Nayagarah and two in Berhampur.According to the police, Panda was arrested from a house in Berhampur town where he had been living for the past several weeks to recruit young people in his newly formed party – Communist Party of India (Marxist-Leninist-Maoist).Revising the list of materials seized that was made public by Director General of Police Sanjeev Marik earlier, the city police said that apart from one revolver, many live cartridges, one laptop, 10 mobile phones, 800 gram of gold, more than two lakh rupees cash, two hard discs, and five pen drives, as many as 45 mobile [phone SIM cards were seized from the possession of Panda.