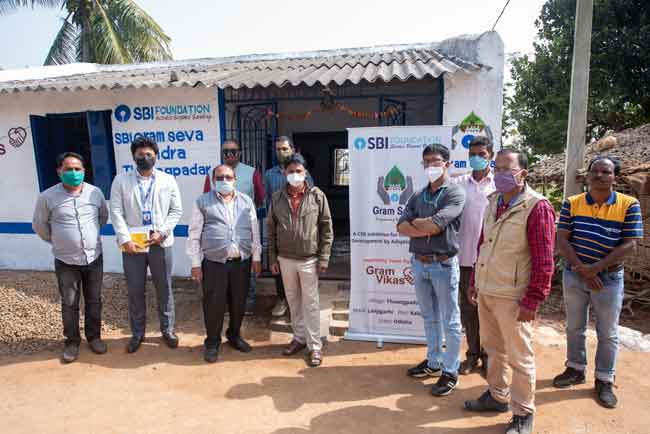 Through Gram Seva, SBI Foundation will work towards building self-reliant villages which would continue to grow sustainably and thereby truly realizing Gandhian philosophy of Gram Swaraj, according an official release.

Gram Vikas will be implementing the project in the next three years for the integrated development of villages in water and sanitation, education, digitalisation of villages, health, child & youth development, village institution development, entrepreneurship development, livelihood and other fields.

This collaborative approach is expected to achieve the following goals in three years:
• To link the various government schemes/services to each of the activities and to individuals.
• To lay emphasis on digital concepts and create awareness and access to various information online
• Developing the village through holistic intervention for improvement of infrastructure and basic facilities therein.
• To involve the panchayat in development programs and to create an environment for participatory efforts by encouraging rural asset creation and sustainability.

All the teams participating in the Gram Seva Cricket Premier League, which was conducted as the flagging off program of Gram Seva, were felicitated with cricket kits by the dignitaries. The dignitaries also inaugurated the first Gram Seva Kendra in Thuangpadar.

The guests interacted with the community there and introduced the program and requested the community’s support in making the program a success. Singh encouraged the people to take the benefits of different insurance and pension schemes sponsored by Government through bank and assured all help to make the project a success.

Johnson reassured Gram Vikas’s commitment for community development and wished the peoples’ participation for success of the project. “Gram Seva Kendra is the first step for digitalization of villages and the nodal centre for all project activities. Gram Vikas will take up different developmental initiatives in the area very shortly, according to Nirmal Mohanty from Gram Vikas.

Gram Vikas is a community development organization working in Odisha and Jharkhand since 1979. It works with rural poor and Adivasi communities to help them lead a dignified life by building capacities, strengthening community institutions and mobilizing resources.

The vision is an equitable and sustainable society where people live in peace with dignity. So far it has touched the lives of more than 600,000 people across 1700 habitations in 27 districts of Odisha and Jharkhand.